Search FoodService Director
Anthony Bourdain turned Americans on to global street foods as he ate his way around carts and stalls in Vietnam, Singapore, the Philippines and other “parts unknown” through his popular TV travels.
Although street food did have a presence in some U.S. cities over the past 15 years—the halal carts in New York and Roy Choi’s Korean taco truck in L.A. are well-known examples—most of the country only experienced it first-hand if they themselves traveled abroad.
But that was enough for two growing fast casuals, Piada Italian Street Food and Pita Mediterranean Street Food, to jump on “street food” as a marketing hook more than a decade ago and incorporate the phrase into their names.
Fast forward to 2022, and consumers have become much more primed to explore street food. Items like Mexican tortas and street tacos, Indian samosas, Venezuelan arepas, Jamaican jerk chicken and Vietnamese bao are not only sold from food trucks and mom-and-pop eateries, they’re launching in mainstream chains and expanding in food halls and markets around the country.
A recent report on global street foods from Chicago-based research company Datassential confirms the trend is on the rise. Nearly half (49 percent) of consumers say they are interested in global street foods, and the term “street” now appears on 11% of menus, up 17% from four years ago.
“Street food is all about taking your customer on a culinary journey,” said Shawn Edelman, corporate executive chef for The Halal Guys, the 100+ unit chain that grew from one street cart parked on a New York City corner in 1990. “Street food concepts can connect with their guest and help them imagine what it would be like if they were eating in the streets of Europe or the Middle East.”
Although their menus are now more expansive, both Piada and Pita Mediterranean heightened the recognition of street food as a category. And the original street foods that launched each concept are still best-sellers.
“Identifying as street food makes it fun and accessible,” said Matt Harding, senior VP of culinary and menu innovation for Piada, which launched in 2010 and now numbers 49 units. “And people understand that it’s mobile, and that’s a plus.”
The inspiration for Piada was the Italian piadina, a rolled, handheld sandwich typically filled with prosciutto, arugula and mostarda (a fruity, mustard-flavored condiment) and eaten on the street in Italy. For the fast-casual lunch customer, “we had to make it more of a meal rather than a street snack, so we added more protein and rolled the dough thinner,” said Harding. “It’s served wrapped in foil to keep it warm.” 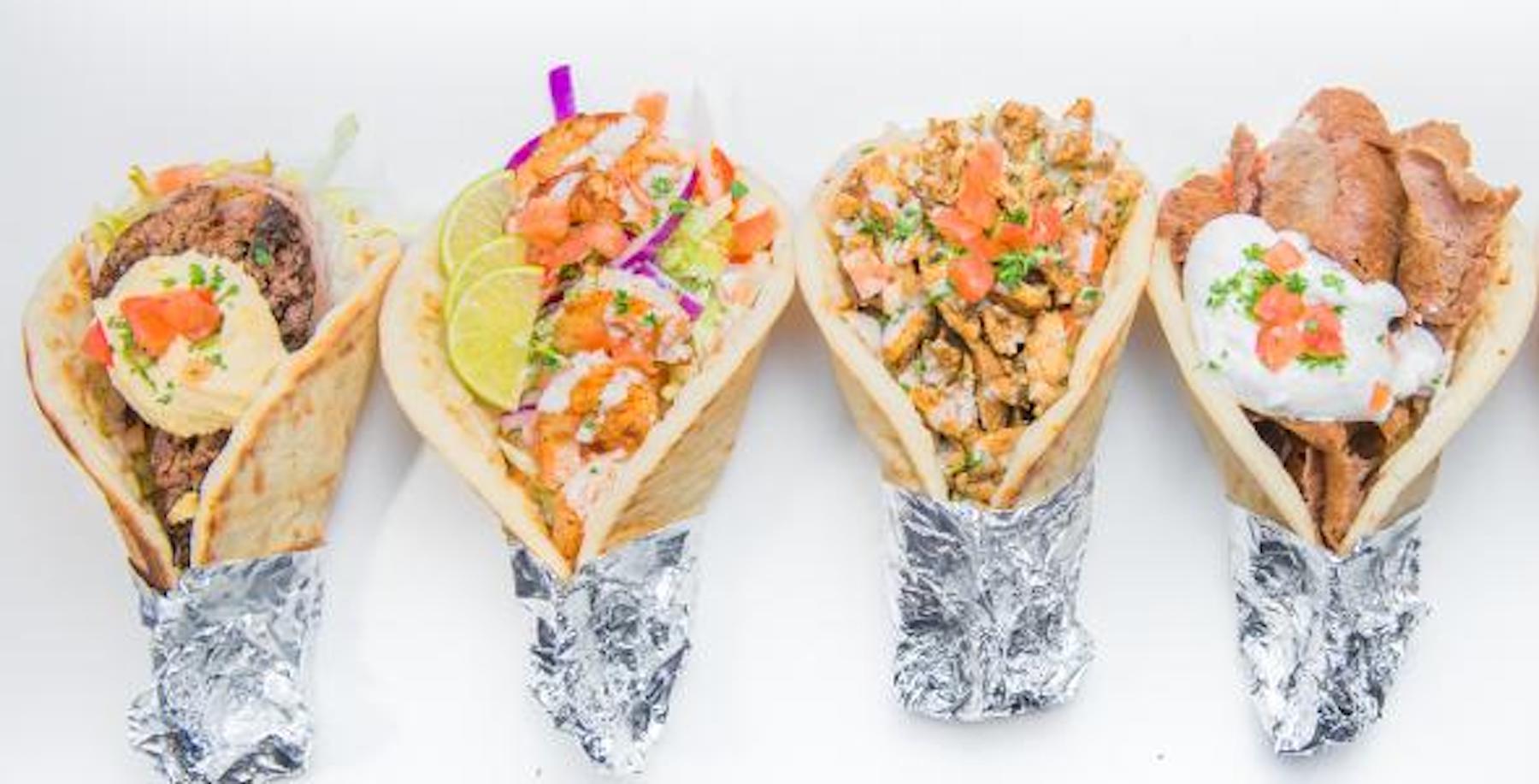 Pita’s recipes have been tweaked slightly since the concept opened in 2012. / Photo courtesy of Pita Mediterranean
Piada’s most popular sandwich is the one filled with avocado, tomatoes, fresh mozzarella, corn salad and basil aioli. Customers then add a protein (seasoned grilled chicken is a favorite).
“We make sure our products are as authentic as possible,” said Harding. The dough for the piadas is cooked to order on a stone, just like in Italy, then brushed with olive oil and seasoned with salt and pepper. “Everything here is made fresh, but the menu and techniques have to match the skillset of the staff,” he said.
Other Italian street snacks, like arancini (fried rice balls) and potato croquettes, would be difficult to make from scratch in this setting. “Plus, we shouldn’t get ahead of the American public,” said Harding.
The menu at Pita also has authentic roots, but its recipes have been tweaked slightly since the concept opened in 2012 and expanded to 35 locations, including two food trucks. From the beginning, founder Nour Rabai wanted to “make people feel like they’re taking a vacation in the Mediterranean,” and he includes foods typically sold by street vendors in Greece, Israel and neighboring countries, including his native Lebanon.
An entire menu category is devoted to street pitas, which are filled with gyro meat, shawarma, falafel, kafta and more. “The No. 1 selling item is the gyro, filled traditionally with shaved lamb or beef. Chicken gyros are also popular,” said Rabai. Both are topped with lettuce, tomato, onion and tzatziki sauce.
Rabai specs a slightly thicker pita bread than is used in the Mediterranean countries and scales up production by partnering with suppliers to procure the sauces, marinades and seasonings. “We get in marinated proteins and then cook it in the stores, and all the spices and seasonings come from overseas,” he said.
A menu based on portable street food is very much in step with the times. “Since the pandemic, our business has been 50-50 dine-in and to-go,” said Rabai. “And 27-30% of to-go orders come from third-party platforms.”
Customer demand has pushed both Piada and Pita to expand their menus. Bowls are big sellers for both concepts, and Piada tapers its takeout bowl on the bottom to make it easier to hold in one hand.
Pasta now comprises 50% of Piada’s menu and Pita has an extensive selection of platters and salads—all of which cross-utilize ingredients used in its street pitas.
These days, emerging fast casuals and food halls are becoming street food leaders, introducing Americans to less familiar items. Rasa, a fast casual with four locations in metro Washington, D.C., is acquainting consumers with chaat, a traditional snack in India.
“Before launching in 2017, we spent one month traveling through India from north to south, trying a ton of different street foods,” said Sahil Rahman, Rasa’s co-founder. “We wanted to showcase all the diversity.” 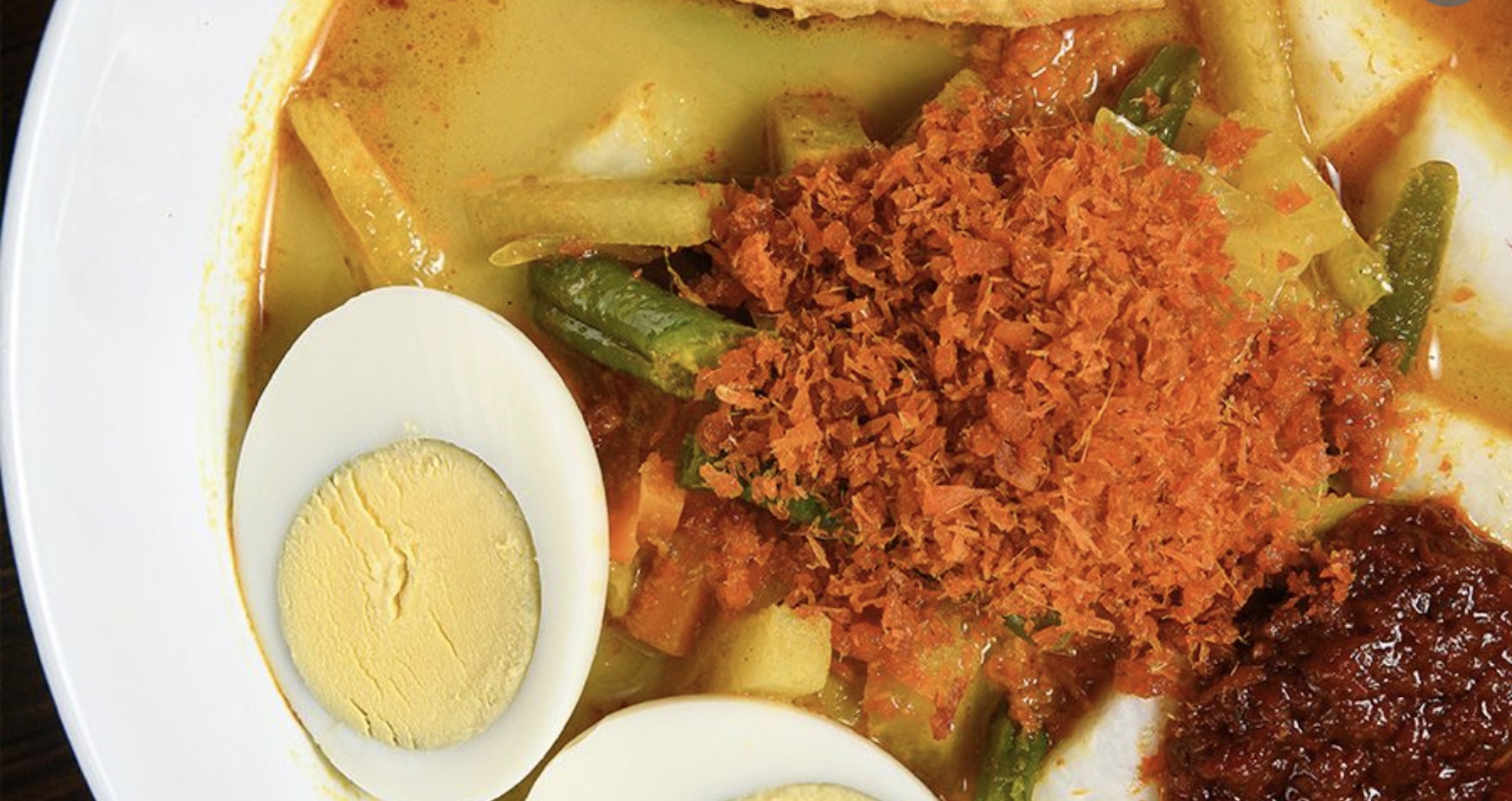 Nyonya dishes are on offer in the Urban Hawker food hall. / Photo courtesy of Daisy’s Dream
Mini chaat versions are on Rasa’s menu, but Rahman also added a lesser-known preparation: Samosa Chaat, a base of chickpeas topped with pieces of potato-filled samosas and three condiments—sweet tamarind chutney, mint cilantro chutney and cumin yogurt. “We finish it off with crisp chickpea flour noodles to add something crunchy on top,” said Rahman. That crunch is a typical component of chaat.
“Chaat translates to ‘lick’ and the name is used broadly to cover a whole category of street snacks,” he said.
Another street food in the works is Papri Chaat. It’s composed of flour crisps, chickpeas, three chutneys and a dusting of spice.
Both Rahman and his business partner, Rahul Vinod, grew up in the Indian restaurant community; their fathers are partners in several full-service concepts. “At Rasa, we take the flavors we grew up with and make them accessible to fast-casual customers while maintaining authenticity,” said Rahman.
Familiarizing customers with authentic street food is the mission of the new Urban Hawker food hall, which just opened this month in New York City. Eleven of the 17 vendors are from Singapore, here on visas to run their food stalls just as they would in the many hawker centers over there. Their menus cover a breadth of Asian cuisines, including Malay, Peranakan, Chinese and Indian.
Urban Hawker is the realization of a plan dreamed up by KF Seetoh, founder of Singapore-based company Makansutra, which is dedicated to promoting street food culture, and Anthony Bourdain. The two first met in 2013 when Bourdain was eating his way around the world and hatched the idea to open Bourdain Market, a 100-vendor global street food center in New York City. The grand plan hit many roadblocks along the way, and with Bourdain’s death in 2018, it unfortunately never came to be.
Urban Hawker embodies that vision, albeit on a much smaller scale.
“At Urban Hawker, we have a great range of international flavors that we’re excited to present to New York’s diverse and curious palates and people,” said Seeoth. “I have always believed that our hawker food will be well-liked by the world. Why? Because it’s just good, humble heritage fare that the world will love, too.”
Several of the vendors come from multi-generational Singaporean concepts, such as Wok & Staple by Dragon Phoenix, creator of the street-food icon Sambal Chili Crab, and White Restaurant, serving up rice noodles with prawns, fried ginger wings and pork wontons.
The market also boasts a number of “hawkpreneurs,” much smaller concepts that focus on one or two menu items. Daisy’s Dream features classic native Nyonya dishes, like laksa, a coconut curry rice noodle stew, while Hainan Jones offers Singapore’s Hainanese chicken rice, one of the most well-known heritage street foods.
Urban Hawker also has stalls that give traditional street foods a hip, modern twist. Prawnaholic Collections serves Special Prawn Ramen made with pork belly, prawns and fish cake, while Ashes Burnit offers a Grilled Satay Chicken Burger with marinated chicken thighs, Asian slaw and peanut sauce, and a Crispy Fried Fish Burger with basil miso aioli.
Near the entrance of Urban Hawker is Kopifellas, a stall specializing in Singaporean coffee. It’s brewed from robusta beans and served with much fanfare as it’s poured from way above into the cup.
In addition to the 11 vendors from Singapore, there are Asian-American concepts selling pastries, Filipino comfort food, dim sum and Indonesian fare, plus the full-service Sling Bar dispensing cocktails and Malaysian-inspired bites.
New Yorkers are known to be adventurous eaters, but the rest of the U.S. seems more ready than ever to try lesser-known street foods.
According to Datassential, laksa—the spicy coconut-based noodle soup—is up 180% on menus, though that growth comes from a very small base. The researcher also found that consumers are interested in trying more niche items as Bulgarian banitsa (a cheese-filled filo pastry), Colombian cholado (an icy fruit drink) and Ugandan rolex (eggs, cabbage, onion and tomato wrapped in chapati).
Very few U.S. consumers have tried jianbing, but of those who have, 35% love or like it, found Datassential. One of China’s most popular street breakfasts, jianbing is composed of a thin crepe-like pancake cooked crisp with eggs, various sauces and ingredients such as scallions, cilantro and mustard pickles. It’s folded to make for easy handheld eating.
While some food halls and small mom-and-pops are serving jianbing in Chicago, New York and San Francisco, Harding of Piada Italian Street Food thinks it’s poised to become more widespread.
“Bings are amazing and should hit America in a big way soon,” he said. “Americans are comfortable with all Asian flavors, and jianbing are inexpensive to make and affordable.”
Click here or text FSD to (877) 281-7554 to receive text alerts from FoodService Director and get the news and insights that matter to your operation.
The latest from FoodService Director, sent straight to your inbox.
Click here or text FSD to (877) 281-7554 to receive text alerts from FoodService Director and get the news and insights that matter to your operation.
The latest from FoodService Director, sent straight to your inbox.
Fresh recipes to help you create innovative menus and signature dishes.
Learn more about our latest honoree.
Borrow innovative ideas and time-saving tricks from your peers.
Tune into FSD’s two podcasts, Dig In and Menu Feed.
FSD’s annual culinary event for noncommercial foodservice operations.
Get exclusive industry content and explore new solutions from our sponsors.
Winsight is a leading B2B information services company focused on the food and beverage industry, providing insight and market intelligence to business leaders in every channel consumers buy food and beverage – convenience stores, grocery retailing, restaurants and noncommercial foodservice – through media, events, data products, advisory services, and trade shows.
Do not sell my personal infoPrivacy PolicyContact UsRSS
Copyright © Winsight, LLC. 2022