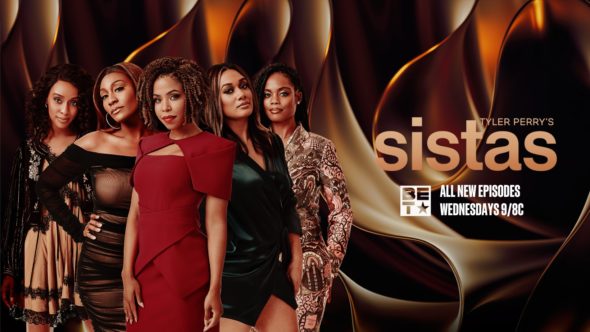 Like The Oval, Tyler Perry’s Sistas has been a very good performer for BET in the past. Last season, its live audience grew year-over-year, and that’s rare since more and more people are shifting to streaming and other forms of delayed viewing. Will that pattern continue? Will Sistas be cancelled or renewed for season six? Stay tuned.
A dramatic TV series, Tyler Perry’s Sistas stars KJ Smith, Mignon, Ebony Obsidian, Novi Brown, Crystal Renee’ Hayslett, DeVale Ellis, Chido Nwokocha, Anthony Dalton II, Brian Jordan Jr., Kevin A. Walton, and Trinity Whiteside. The series follows a group of single black women bound together by their long-standing friendship. These five ladies — Andi (Smith), Danni (Mignon), Karen (Obsidian), Sabrina (Brown), and Fatima (Hayslett) — go after what they desire and handle the blows of life with resilience, determination, and the support of each other. The fifth season finds the ladies jumping back into the world of dating.
The ratings are typically the best indication of a show’s chances of staying on the air. The higher the ratings, the better the chances of survival. This chart will be updated as new ratings data becomes available.

Note: If you’re not seeing the updated chart, please try reloading the page or view it here.
For comparisons: Season four of Tyler Perry’s Sistas on BET averaged a 0.22 rating in the 18-49 demographic and 980,000 viewers.
Note: These are the final national ratings, including all live+same day viewing and DVR playback (through 3:00 AM). Early fast affiliate ratings (estimates) are indicated with an “*”. While these numbers don’t include further delayed or streaming viewing, they are a very good indicator of how a show is performing, especially when compared to others on the same channel. There can be other economic factors involved in a show’s fate, but typically the higher-rated series are renewed and the lower-rated ones are cancelled.

What do you think? Do you like the Tyler Perry’s Sistas TV series on BET? Should it be cancelled or renewed for a sixth season?